The Starlark in deep space

The Starlark in deep space 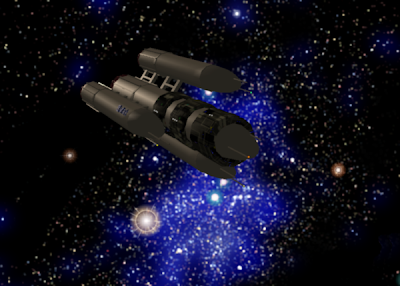 (Extract from Classic Ships; The Starlark; Encyclopaedia Galactica)
The ship was 600 metres long without shields, and built of lightweight carbon-titanium composites; mass without fuel 170,000 tonnes, with fuel (including external tanks) two million tonnes. With four powerful antimatter-catalysed fusion motors and massive external propellant tanks during the acceleration phase, the Starlark (when first built) could reach ten percent of light speed. A turingrade-plus ship's brain (which had adopted the name 'Sir Fred Hoyle' after the famous Information Age cosmologist, and a personality to match) controlled the daily operation of the ship, with a human crew as back-up working in shifts throughout the voyage.
Antimatter for fusion catalysis was obtained from the extensive solar amat farms in the inner Solar System; it appears that the Goddess of Earth manipulated the energy market at this time to facilitate the diaspora of Humanity into interstellar space. Nevertheless these so-called 'backyarder' ships were hastily designed and built, and several failed to reach their destinations.
Additionally the hibernation technology available at that time was not entirely reliable, and a proportion of the refugees stored in the central hold did not survive, or suffered various kinds of brain damage and other ill effects. Later in the history of this long-serving vessel more advanced nanostasis technology allowed a near-total survival rate; just as upgraded drive systems decreased the average time between stars.

Matter-antimatter versus catalysed fusion. Cool idea. Wish I had thought of that.

Steve Bowers said...
This comment has been removed by the author.
5:03 AM 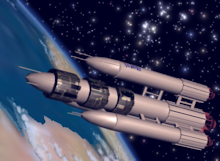